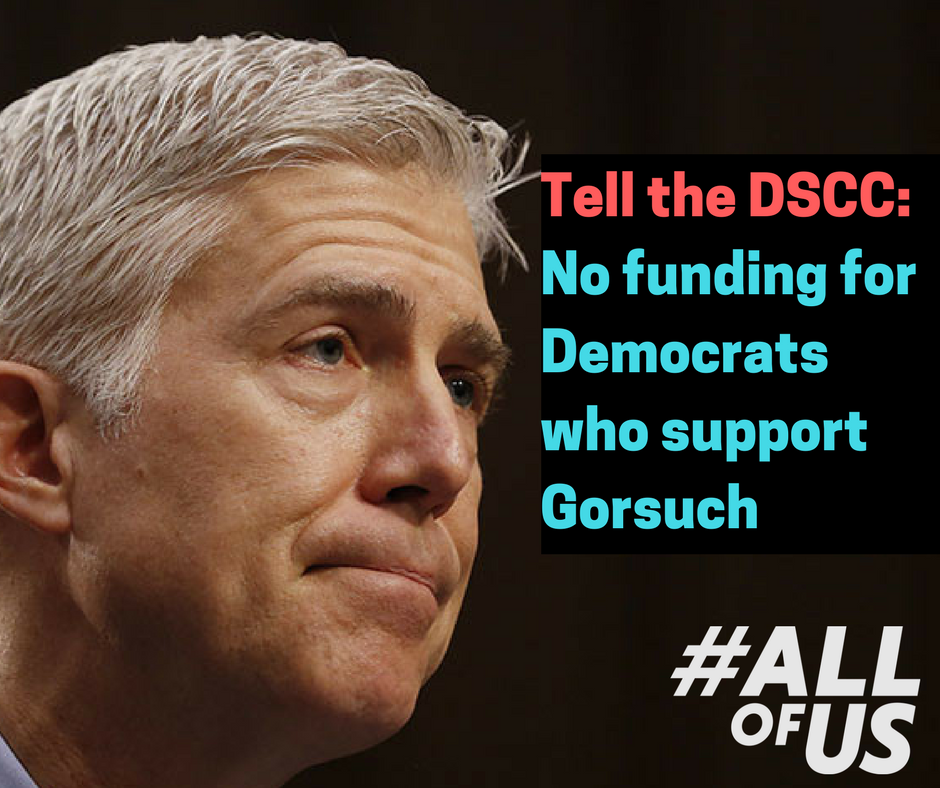 Every Democrat should sign this petition.  Tell DSCC Chair Van Hollen: No reelection funds for any Senate Democrat who votes or strikes a deal to advance the nomination of right-wing extremist Neil Gorsuch.  You wouldn’t think there would be any Democratic Senators in that group, but there are, including Joe Manchin of West Virginia and Heidi Heitkamp of North Dakota, even Patrick Leahy of Vermont, who should know better.

If Senate Democrats are looking for good reasons to not just oppose Neil Gorsuch’s confirmation to the Supreme Court, but to force Mitch McConnell to go nuclear to get him on the court, there’s plenty. Let’s start with the fact that this is a stolen seat. By all rights, the only person who should be considered for the court is Merrick Garland, President Obama’s highly qualified and completely noncontroversial nominee who was blockaded by Republicans in an unprecedented and unprincipled display of partisanship. You don’t like the idea that maybe it’s tit-for-tat and you don’t want to look petty. Get over it.

There are plenty of reasons based in Gorsuch’s person, however, if Democrats need them. Like the fact that Gorsuch is a right-wing extremist so bought-into right-wing extremism that he uses “Democrat” as an adjective. That’s an implicit tip-off to anyone paying attention that he is a supremely political actor and will be serving the far-right before serving the constitution. He’s an ideologue and will rule as one. There’s also little indication that Gorsuch will be an independent actor when—and it’s increasingly looking like it will be when and not if—the court has to weigh in on a constitutional crisis created by popular vote loser Donald Trump.

Further, any senator who is worried about justifying a filibuster vote to their constituents only needs one story to justify their vote—the story of Alphonse Maddin, the “frozen trucker.” Gorsuch actually ruled that Maddin was justifiably fired by his employer when he disobeyed an order so that he could save himself from freezing to death. Gorsuch was in the minority in that decision, because it was an extreme position to take, but that’s who Gorsuch is. Any senator will be able to relate that story to a constituent to justify his or her vote to block Gorsuch.