We already knew our Congressman Steve King is in the habit of palling around with fascists, from sharing social media posts by Nazis and other white supremacists over and over, to taking meetings with fascist leaders.  So you will not be surprised that he has now openly endorsed a white supremacist mayoral candidate running in Toronto, Ontario.  Why does he do these things?  Because Steve King is a fascist.

King, we should underline, is a member in good standing of the Republican Party, treated well by Trump and by House Speaker Paul Ryan.  He is co-chair of Kim Reynolds’ campaign for Iowa Governor.  Because the whole Republican Party is fascist now.

Another shocking-but-not-surprising thing from Representative Steve King, the Republican who represents this very district: he shared, approvingly, a social media post from a British neo-Nazi, Mark Collett.  That’s not just my characterization of Collett’s views, he describes himself as a “Nazi sympathizer” and an admirer of Hitler’s Germany.

There can be no doubt about Collett’s abhorrent vision. As a Slate  piece explained, “According to HuffPost, Collett was once the youth leader of the British National Party, an extreme far-right party, and he once said that AIDS is a ‘friendly disease because blacks, drug users, and gays have it.’ He has also espoused anti-Semitic beliefs and appeared frequently on far-right and white nationalist podcasts. In his Twitter feed, he talks about white genocide, a popular concept among white supremacists, and the ‘price of multiculturalism.’”

But what matters in this case is not Collett’s disgusting worldview. It’s not even Steve King’s unsurprising willingness to promote Collett’s online content.

What shouldn’t go overlooked is the Iowa Republican’s ability to get away with stuff like this – because the right-wing congressman’s party has an endless tolerance for his offensive antics. Or put another way, the question is less about Steve King and more about what GOP leaders intend to do about Steve King.

For example, Iowa Gov. Kim Reynolds (R) is running for a full term this year, and she chose King to serve as one of her campaign co-chairs.

This isn’t new behavior for Steve King.  We have previously documented some of his white supremacist statements here and noted his friendly relations with fascists in France.

If the Iowa Republican Party is OK with this, and obviously they are, then they are un-American, and unfit to be in government.

King: We Should Require Congress to be Fiscally Responsible Every Day

Washington, D.C.— U.S. Congressman Steve King (IA-05) today called on his colleagues to hold themselves accountable to taxpayers and agree to a plan to reduce the federal deficit by voting for the Conference Report on H.R. 4241, the Deficit Reduction Act of 2005….

“Americans expect their representatives to be fiscally responsible, but it doesn’t always happen,” said King. “It shouldn’t be the first time in eight years we’re requiring Congress to look for and eliminate abuse, waste and fraud in government programs, we should require it every day. The Deficit Reduction Act is a big step toward making government accountable to the taxpayers and reducing the federal deficit.”

Today, not so much.  House Republicans have finally unveiled their tax-cut-for-the-rich proposal, which they admit will balloon the federal deficit by more than $1.5 trillion.  You don’t see any Republican deficit hawks now.  Because their deficit hawkery was always a fraud.  Republicans were all about reducing the deficit when Democrats were in power, but now that Republicans are running the government, lo! behold!  Deficits turn out to be unimportant.  When they are finally turned out of office, they will suddenly remember again that the deficit is the most critical problem facing the country and will tell you this is why we must cut social spending.

Steve King’s pal Marine Le Pen pretends to be a “populist” and denies that her politics are the fascist politics of her father, Jean-Marie le Pen.  That pretense was damaged, perhaps along with her ambitions to be elected President of France, when she denied French complicity in rounding up Jews during WWII.

Le Pen the Younger disclaims her father’s racist baggage, and presents herself as a populist/nationalist in the model of Nigel Farage and Donald Trump (themselves notorious racists, but of the sort who make recourse to dog whistles instead of out-and-out racism, at least some of the time).

On Sunday, Le Pen disclaimed French responsibility for the notorious “Vel d’Hiv” incident in which French police rounded up 13,000 Jews and crammed them into the Velodrome d’Hiver so that Nazi occupiers could deport them to Auschwitz, saying “”I think France isn’t responsible for the Vel d’Hiv…I think that, in general, if there are people responsible, it is those who were in power at the time. It is not France.”

The remarks came just a couple weeks before the French general election, which has many around the world nervous, given the recent success of other crypto-fascist “populists” around the world.

Do I need to add that Le Pen is a Trump supporter?

And yes, this is the new Republican “normal.”

In case you had any doubt as to whether our Representative in Congress is openly white supremacist, let’s see what David Duke, former Grand Wizard of the KKK, has to say about it:

OK, that clears it up. 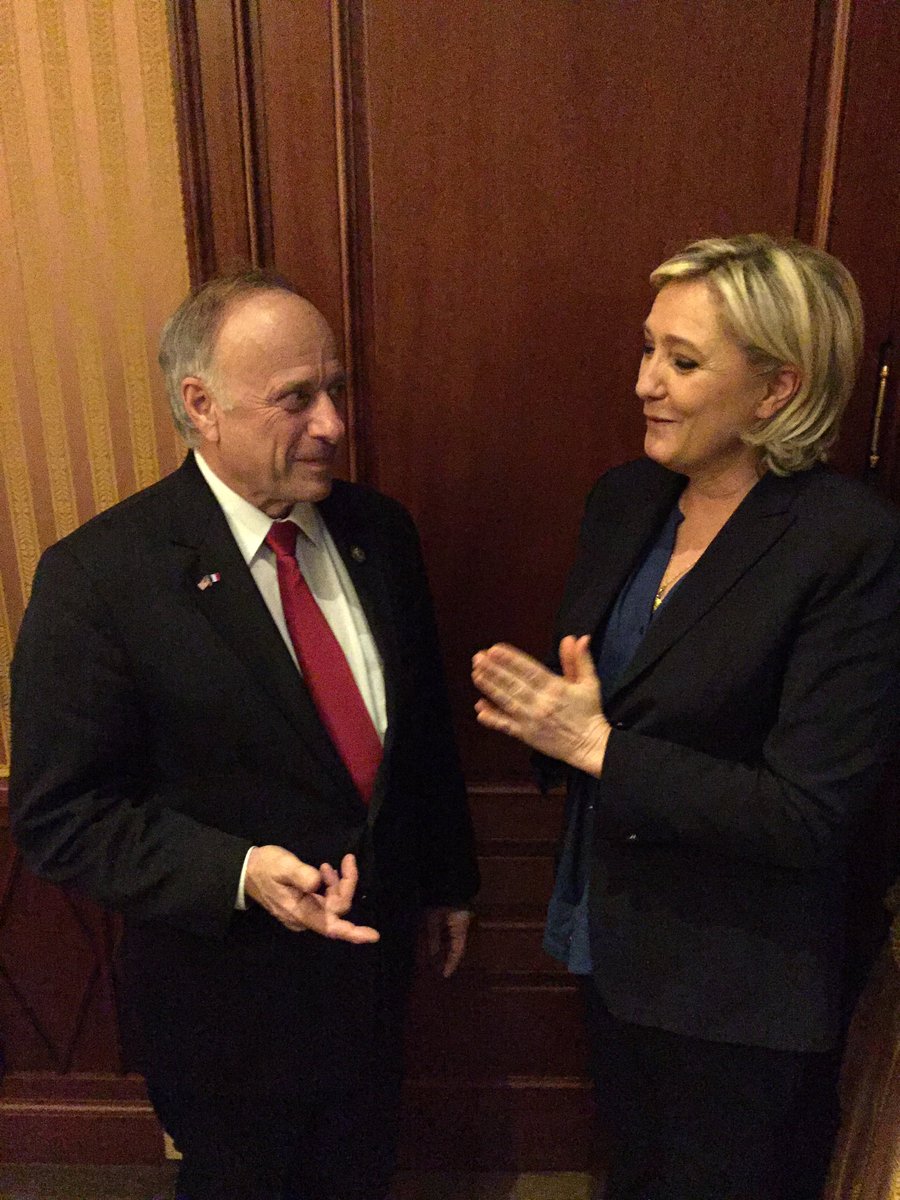